The carpark of Woolmers Estate is full but quiet.

If you turn your back to the cars and towards the paddocks rolling west towards Norfolk Plains, you are taken back to Tasmania’s colonial past.

Buildings that date back to the early 1800s when the Archer family began working the land are dotted across the farmstead.

The family houses, workers’ cottages, chapel, blacksmith’s shop, stables, bakehouse, pump house and gardener’s cottage all give a glimpse into how the estate worked.

Juxtaposed against that history is the modern Nigel Peck Centre that welcomes visitors to the UNESCO World Heritage Site.

Inside it is cool and the restaurant is full of tourists and locals enjoying the view over the Rose Garden, towards the main building and the Great Western Tiers beyond.

It is a wonderful example of Northern Tasmania leveraging its colonial built heritage in a modern retelling.

And it is one of the many competitive advantages Northern Tasmania has.

By thinking globally and working regionally, real and lasting improvements in economic prosperity can be achieved.

That is the fundamental goal of Northern Tasmania Development Corporation and one I am looking forward to working very hard to fulfill as the new chief executive officer.

As a former journalist, I always come back to the importance of having a compelling narrative; a good story. It is how we communicate ideas, identify areas we need to improve and celebrate success.

That all starts with a conversation – a story – about the wonderful reasons why we love this region and the opportunities emerging. Northern Tasmania remains and great place to work, live and raise a family.

When you add those liveability elements to the fact that Launceston is Australia’s first Gigabit City and is serviced by an award-winning airport, you have a compelling case for people to be based in and continue to invest in the region.

Because people are at the heart of any successful economy. People working productively, collaboratively and towards an overall purpose to make their community a great place to work and reside.

This is not without headwinds.

Tasmania has an ageing workforce and slow population growth, which, without action, will impact the economy over the next decade.

But when facing the winds of change you have two choices: build walls or build windmills.

The solution to Northern Tasmania’s population challenge is in both the attention and retention of people to the region.

One of the main focuses of NTDC over the next six months will be to continue its work around population attraction and retention.

Our population attraction coordinator Edward Obi is working extremely hard in this field, regularly settling skilled migrants and connecting them with employers.

The other main focus of NTDC will be establishing an action plan that puts the Regional Economic Development Strategy into practice; a task led by projects manager Georgie Brown.

This year promises to be an exciting time for Northern Tasmania and NTDC is positive its plans and the work its member councils are engaged in will deliver great results for our region.

I look forward to sharing the great wins in Northern Tasmania.

The Regional Economic Development Strategy aimed to provide a shared understanding of where future economic and jobs growth would emerge.

Doing this will not only make our region competitive in our state but make it more competitive nationally and internationally.

The REDS provides a vehicle for engaging the community about regional needs and priorities, assists in bringing together key stakeholders, facilitates access to resources and focuses activities around economic opportunities.

It identifies key areas of advantage in our regional economy including food and agribusiness, tourism, competitive manufacturing, health and social assistance, education, entrepreneurship and innovation.

The strategy lists six priorities to focus on for maximum economic impact:

Participation and Productivity:
Monitor the health and well-being and education rates of our community and advocate for continual improvement.

The next stage of implementation is to take the six strategic priorities identified in the REDS and develop actionable priorities with KPIs.

NTDC and its member councils know that greater collaboration will improve the economic outcomes for Northern Tasmania. Upcoming workshops will identify where current programs and resources can be maximised to reduce duplication and increase the benefits to Northern Tasmania.

NTDC has an ambitious but achievable goal of increasing gross regional product by 50 per cent, adding 8000 new jobs and seeing a $100 increase in average wage by 2026.

Population Coordinator Edward Obi is arranging workshops in each council area for jobseekers and those who want to help jobseekers find employment.

We will be recording a session and working with Flinders to have them video conference into a session as costs prohibited holding one on the Island.

NTDC is working with its Member Councils to examine what the key projects, priorities and developments are that will drive economic growth in each municipality.

The “2020 Vision” concept has already identified some terrific projects and highlighted the strategic thinking and planning going on across Northern Tasmania.

NTDC has partnered with The Examiner to bring these visions to a wider audience and expect to see them rolled out shortly.

The development of a hydrogen energy hub concept at Bell Bay was endorsed in early 2019 by Member Councils as one of the priority projects for the region.

NTDC has been working with Council Members to position Bell Bay as a potential green hydrogen energy hub that could attract support from the Federal Government for demonstration and early stage commercial projects.

Energy Minister Guy Barnett has released the state government’s draft action plan, which outlines a vision for the state to become a world leader in large-scale renewable hydrogen production by 2030.

NTDC will be working with Member Councils, the private sector and Chambers of Commerce to fully examine and explain the opportunities this exciting plan could bring to Northern Tasmania.

Edward is meeting with several skilled migrants each week to help them settle into Northern Tasmania and find work.

NTDC has been sharing their stories, like the one below:

When Kenny set out to further his education, he didn’t have permanent migration in mind. He had a job as a pharmacist in one of Nigeria’s biggest drugstore franchises and was happy to enrol in the local university (University of Lagos).

To his most enormous shock and disappointment, Kenny’s application was unsuccessful because of too many applicants and too few slots, and he had to wait indefinitely for a slot to open. The disappointment prompted Kenny to look outside the shores of Nigeria for a school that could supervise his research. He applied to schools in Europe, America and Australia and was happy to accept an offer from the University of Tasmania in Australia [UTAS].

Upon commencing his research in UTAS, Kenny became aware of how his skills and aspirations fit with the opportunities in Tasmania. He started to explore the possibility of staying back after his studies to contribute to the region. With the Tasmanian Migration nomination system he was able to get the points required to apply for permanent residency after his studies and now lives in Launceston where he works in the University of Tasmania as a lecturer in Rural Health. His research interests include rural health issues, public health (epidemiology and biostatistics), cardiovascular research and clinical pharmacy. Kenny also functions as a rural pharmacy liaison officer to support students on placement and improve collaboration between pharmacists, pharmacy students and the university community, and to promote professional development and networking opportunities as required.

There are quite a few stories like this that highlight the role the University of Tasmania is playing in countering the skills shortages in the greater Launceston area.

Edward said skilled workers like Kenny are welcome and contribute to the prosperity of the region.

In late January, we were joined by UTAS School of Business and Economics student Josh Rowlands for work experience. Josh is studying business and Chinese language. He is passionate about supporting Tasmanian business, industry development, and sustainable economic initiatives. Josh will play a role in working on the 2020 Vision and, given he speaks Mandarin after living in China for 3.5 years with his parents, will help NTDC plan a Chinese student retention and community/business engagement strategy.

Josh spent his week talking to Chinese businesses to learn about what opportunities exist in a growing area of the market and what challenges they might need help to overcome.

The State story
On a state basis, Tasmania’s economy led the way, growing at an estimated 3.6% over the year to June 2019. 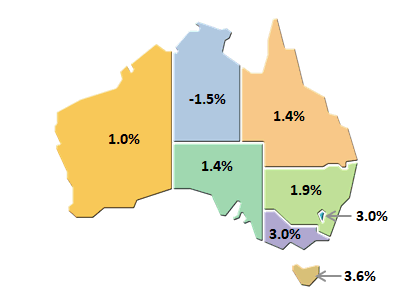 So, what is driving the State’s economic growth? The State’s capital and regional economies are often running at different speeds, as shown below.

We can see from the chart that much of Tasmania’s economic growth was driven by Hobart, but pleasingly, the regional Tasmanian economy is also performing strongly, particularly when compared to regional economies in the other States.

The following data is for Launceston (as a representative component of the Northern Tasmanian economy):

Economic growth in our region has been driven primarily by productivity growth, and a small increase in population.

So, which industry sectors contributed to the productivity growth in our local economy? 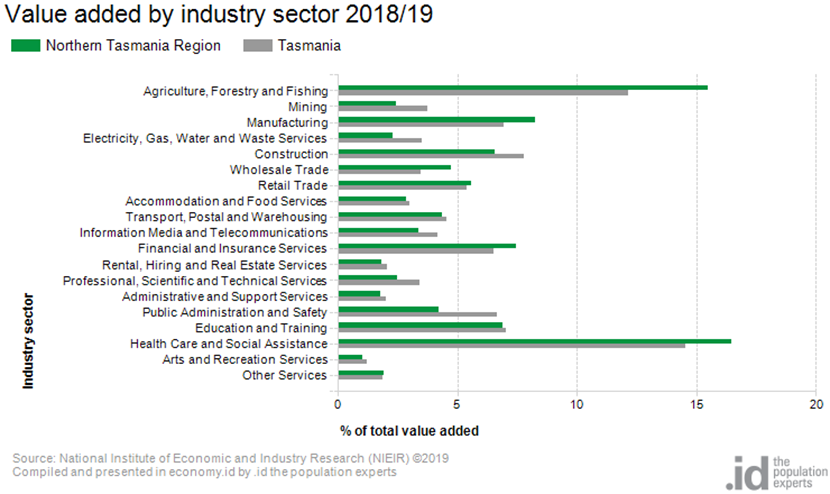 In combination these three industries accounted for $2,793 million or 40.2% of the total value added by industry in the Northern Tasmania Region.